Since 2013 is coming to and end, I thought it’d be nice to summarize the travel year in a blog post!

I ended up flying 80 flights this year, which is twice as much as the year before. A reason for this, is my Norway adventure in July, which included 20 flights in 5 days.

I use Flightdiary to keep track of all my commercial flights as a passenger. It is a great tool, with a lot of neat features, such as social interaction with Facebook and it summarizes flights based on airline, distance, aircraft type, etc.

Out of the 80 flights, 39 were domestic and 41 were international. The total distance was 53 520 miles (86 132 km) and total time spent in the air was 148 hours and 37 minutes. Or 6.2 days straight in the air! The distance traveled, equals the circumference of the earth 2.2 times! I’ve also contributed with my fair share to the global warming project, with 11,4 tons of CO2 gases. Yey!

In January I flew to Florida to fly some on my own in smaller general aviation aircraft. I flew United in economy from Oslo via Newark to Orlando. On the return I flew business class Orlando-Frankfurt-Oslo-Kristiansand! Very comfortable way to cross the Atlantic 😉

You can read more on my trip home from Florida here 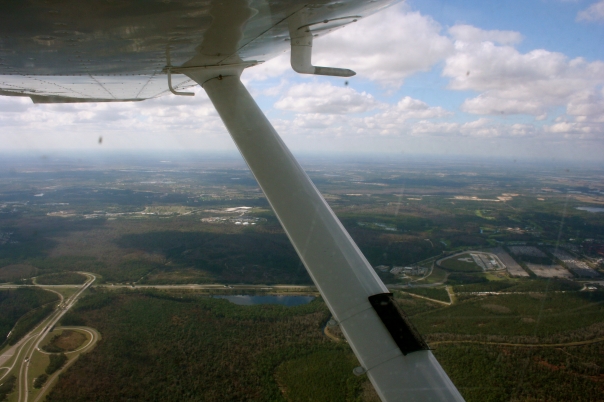 Flying a Cessna 152 in Orlando

“All” I did in February was a mileage run from Kristiansand to Frankfurt via Copenhagen and back in one day. I scored two flights on the now-retired MD82 CPH-FRA-CPH which made the entire run worth while.

Climbing out of Frankfurt on the return to Copenhagen (MD82, SE-DIK)

In March it was time for a well-deserved vacation, and me and my parents flew to Portland, OR to visit family and friends. We flew SAS to Chicago and United to Portland, OR. I got upgraded to economy extra or business on all the flights except from the last hop from Copenhagen-Kristiansand on the return. We had a great time in Oregon and Washington. These two states have previously been undiscovered territory for me (except from Seattle, WA which I visited last year) and to be honest, it is probably one of the most amazing areas in all of the United States. Amazing nature, great local beer and lots to see and do. We returned back to Norway after Easter, in April, after a week on the road.

Cherry blossom in Salem, OR, the state capital.

Mid-May I went to Washington D.C/New York to celebrate May 17th with my family there. May 17th is Norway’s Constitution Day. I flew Kristiansand-Oslo-Copenhagen in economy, an received an “courtesy upgrade” on the trans-Atlantic portion of the flight, Copenhagen-Washington D.C. Very nice, and as always much appreciated.

On the return from Washington D.C to Copenhagen, I was upgraded from economy to business using Optiontown
Before departure, a “bird” tweeted to me that one of the flight attendants would be Lilli, and if I could say “Hi” to her from him. As I boarded through L2, and took a left turn, she stood right by my seat 01E, so finding her was easy. She welcomed me, in the warmest and most sincere way I have ever been greeted on board an airplane. I think it’s easy to conclude that SK926, IAD-CPH, May 21, 2013, easily takes home the award of “The Flight of the Year “ 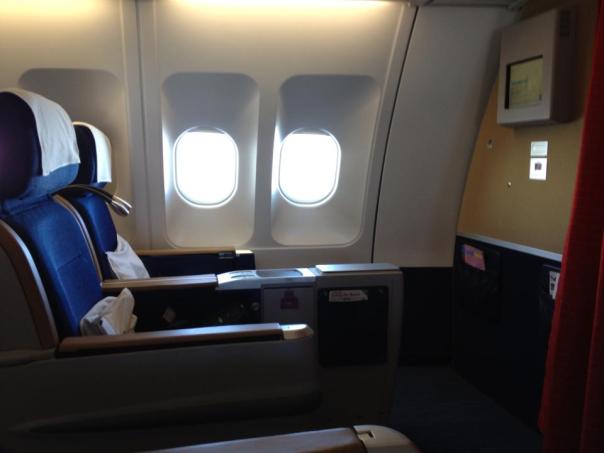 I also did a mileage run to Barcelona later that month, but that was all economy, and not much to report, other than the crew that was… puzzled that I had just flown to Barcelona with them, and that I would also fly back to Oslo with them, on the same aircraft. I guess mileage running isn’t all that know to many crews.

In June, I had to go to Stockholm for work, and that trip included a lot of “firsts” for me. On the first flight, Kristiansand-Oslo, I got to ride cockpit jumpseat!

Climbing to our cruising altitude of FL250 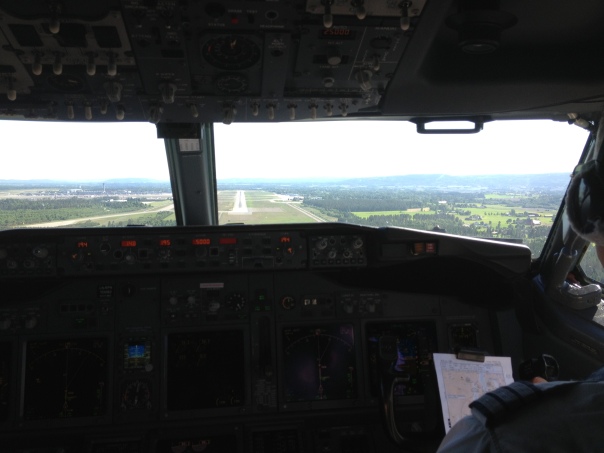 On final for 19R at Oslo

SAS goes above and beyond for their passengers, a HUGE thanks to those who made it possible 🙂

From Oslo to Stockholm I got to fly the B717 for the first time, onboard Blue1 dba SAS.

Shooting a video for Disney Channel Scandinavia 🙂 I also got to fly the DC10 simulator in Västerås for 4 hours! Fun!

After my job was done in Västerås, I did a mileage run to Helsinki. Mainly to get some more flights on the B717, but also to check off Finland as a country I’ve visited (this time I had time to go out of the terminal and stand outside for a few minutes), and not to forget – fly on board an aircraft model which matches the flight number. Yes, SK717 was operated by a 717!

The airport code of Helsinki-Vantaa is kinda funny. I went to HEL(L) for the day.

In June, my brother returned home from Oregon. I flew to pick him up in Oslo, since airfare was cheaper than taking a bus. He could also use my free baggage allowance as a gold member, getting all his stuff home safely.I flew to Oslo in the morning, waited for him to land with British Airways from London, and we took a flight back to Kristiansand later that afternoon. Turned out the flight was completely, packed full, and they needed volunteers to get on a later flight. Since that wasn’t an option for us, and we already had confirmed seats, we didn’t bother. But at least one extra person got home because I ended up, once again, in the cockpit jumpseat!

On final for RWY 22 in Kristiansand

July was the craziest month for me, in terms of travel. I did 20 flights in 5 short days, together with my friend Per Christian. Our trip started in Copenhagen, where we met up. “Faith” would have it, that Lilli was in Copenhagen also that evening so we had a little snack with her before going to our hotel.

It was also Lilli’s birthday, so me and PC brought her flowers and wine 🙂

One of many highlights on our trip, Nordkapp (North Cape) which is the northernmost point in continental Europe (this could be up for discussion though, since it’s located on an island, which is connected to the mainland via an underwater tunnel)

No flying in August 😦

WOW. Do I really need to say anything more? I went on the craziest #avgeek charter flight. You can read more about that trip here

As a part of a promo, SAS offered me renewed gold status if I did 2 round trips in SAS Plus (their new business class product on European routes) between October 1 and October 31. So I did. Two round trips to Nice (NCE) – LOL.
(Frequent flyers often loose contact with the real world, and will often go out of their way to do whatever the airline tells them to do, in order to get a short-cut to elite status.)

But it was fun. I have spent a total of about 55 minutes in Nice on my two trips. Crew thought we were crazy when we boarded the same airplane back to Oslo. Fortunately we were seated in SAS Plus, which means free alcohol. The beers were cold and the sparkling wine in small bottles were endlessly served from the galley.

In November, me and my family flew to Dublin to celebrate my father’s 60th birthday. We had a great time, and I loved the city. Definitely a city I’d like to visit again.

This is the mandatory drink when visiting Dublin. Here enjoyed in the Gravity Bar at the Guinness brewery

Flying from Dublin to Copenhagen on board Blue1 and their B717

To wrap of this extraordinary, wonderful and amazing travel year, I flew to Amsterdam for a weekend with good friends. As you have read so far (if you have read it all, that is) all my flights have been on time and there have been no irregular operations. Of course, this had to change on the final trip of the year. My original flights from Kristiansand to Oslo to Amsterdam all got cancelled because of weather and I got to Amsterdam on later flights, 11 hours delayed. At least I got there eventually.

As this was the final trip for me this year, I had brought with me Christmas cards and chocolates to all the crews I flew with. I think it’s safe to say that it was much appreciated, especially since the weather was crappy all weekend long. They were very happy with my little treat and I wished them all a peaceful and happy Christmas holiday.

In Amsterdam I met up with my good friend Ryan and we had a great time together!

And finally, from the last flight of the year, I present you with this black spinner photo.
Flight WF267 CPH-KRS, Dash 8 Q-400 (LN-WDH)
I received special Hollywood Treatment ™ on board which SAS and Widerøe are best in class of providing.

Thanks a million to all of you who contributed to make 2013 my best travel year yet.
It has been an amazing journey, and I hope 2014 will continue the same way.

With only the best wishes for the year to come.