Getting to Florida is kind of a long haul for me. My trip started Saturday, January 12 with a train ride from Arendal to Oslo, where I checked in to the Radisson Blu Oslo Airport Hotel which is literally as close to the airport terminal as you can get. Very conveniently located hotel. Grabbed a pizza from the airport and headed to bed.

Next morning, Sunday January 13, started early in the A.M. People next door were playing music very loudly. At 4am I could not sleep anymore and decided to start to get ready, though my flight wasn’t until 11 am and I didn’t plan to go over to the airport until 9. Well, no rush, and after getting ready, I went down to grab some breakfast. A lot of flight crews stay at this hotel, and I saw many first officers and captains eating breakfast before a long day at work. One day….

I headed over to the airport terminal to check in. United had representatives checking passports and ESTAs separately from check-in/ bag drop. United Premier Access Priority tags were put on the two bags I checked in, and I was handed boarding passes for both my flight to Newark and my connecting flight to Orlando. Security was a breeze, as I had access to the dedicated Fast Track security lane.

A funny thing I have to mentioned, it really wasn’t too funny until I returned to Norway, but I met a girl I went to high school with at the airport in Oslo. She was headed to Tenerife with some friends. More on that later, though 😉

After passing through security, I walked through the duty free shop, took the stairs up one level and entered the SAS Scandinavian/Business lounge. In my humble opinion, it is a good lounge with a decent selection of food, drinks and after 0100 pm also liquors (stupid Norwegian laws lol)

View from the Star Alliance Gold/First class lounge in Oslo. Looking towards the domestic pier of OSL.

Scheduled departure time was set to 11.15a and boarding started around 10.30a. Today’s flight to Newark, United flight 39, would be operated by the Boeing 757-200 (ex-CO) registration N57111 (Ship #3111) – a fifty-seven first delivered to Continental in 1994. I quickly located my seat on row 22, which really isn’t the 22nd row, because United is trying to standardize exit rows as 20 and 21. So my row was the first row after the exit row, and also the first row in economy class. The seats in front are 45 Economy Plus seats and 16 international BusinessFirst lie flat seats.There are a total of 108 seats in (wh)Y. 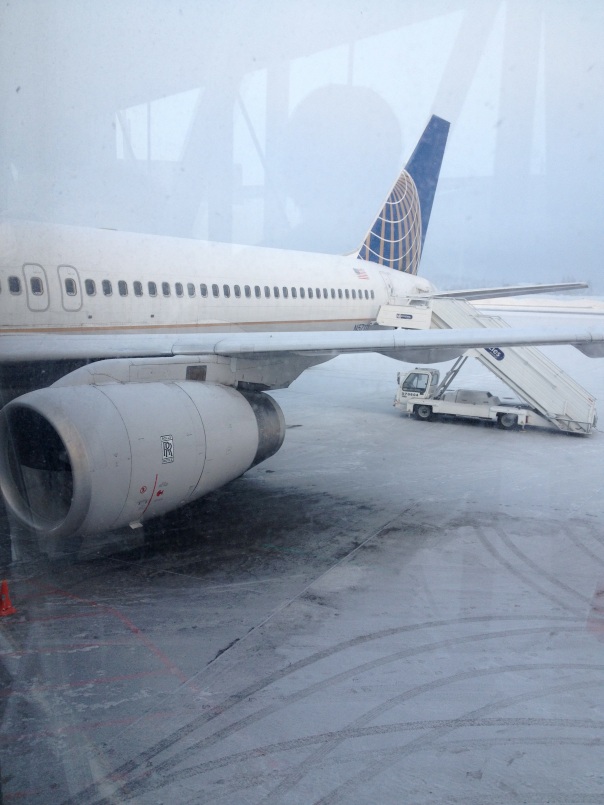 N57111 – ready to go to Newark as UA39. Love the sound of those Rolls Royce engines spooling up for take off.

Being Star Gold and flying United, I’m in boarding group 2. Group 1 is people with special assistance, military and Global Services (the top tier within United’s Mileage Plus program, by invitation only) , as well as First class.  Group 2 is business class passengers, United Plat’s and Gold and Star Alliance Gold. I was one of the first ones onboard in the economy cabin and I found my aisle seat and got seated. I figured the flight would be very full, judged by the quick glance I got of the boarding waiting area, and the seats surely filled up. Eventually a guy approached my row and told me he had the window seat. I got up and let him get to his seat. When “boarding completed” was announced, the middle seat between us was not taken. I think it was the only seat not taken in the economy cabin. Intentional or not from the gate agent, it is certainly something I value a lot when flying long international flights in economy/whY.

Well, once comfortably seated, the International Service Manager (a really funny guy) announced that he hoped Newark was in our travel plans, as this flight was a non-stop service to Newark Liberty International Airport. He said we would push back from the gate early, after the fan blades in the engines had been defrosted (freezing fog in Oslo this morning) and we then would head over to de-ice before take off.

Uh. Or not. Approaching the scheduled departure time, we were still at the gate. Turned out the cargo had been loaded too far aft in the cargo compartment, and that they had to move some of it to the front. An operation that took close to 25 minutes. Alright, once the cargo was in the right place, we were ready to go. We pushed back, stopped, then the Engine #2 started. I was anticipating the start of Engine #1.. Which never came. Then #2 spooled down and the Captain announced they couldn’t start #1. Sort of an issue when you want to cross the Atlantic.

Back to the gate, a mechanic got on board, did his magic, left, and we pushed again. This time both engines started and we could set off to the west!

Take off was interesting. I noticed they spooled the engines, with brakes applied, a lot more than usual. I’m sure it had something to do with the engine #1 not starting properly and the Captain would make sure that everything was running smoothly.

Once in the air, 90 minutes late, we were served meal number one. I got the chicken. I don’t trust the beef option on board airplanes.

I watched “The Campaign”, listened to music and read a little. When we approached the Labrador Strait, we encountered some mild turbulence that pretty much lasted for the remainder of the flight. It was so bumpy at times I had a hard time holding my book straight so I could read lol. 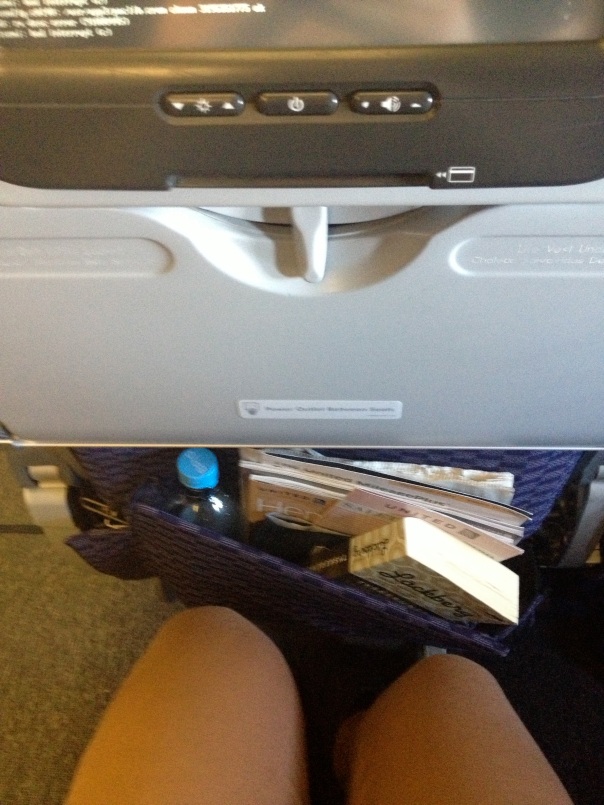 Legroom back in whY 😛

We landed 50 minutes late in EWR, I hurried out of the airplane and ran towards the immigration hall in Terminal C. To my big surprise, it was EMPTY, making the process a lot better. And I still had a chance to catch my connecting flight down to Orlando in.. Well, 1 hour. After a few questions, my passport got its stamp and I could head down stairs for the baggage claim. The bags took forever, I must have waited close to 20 minutes before any bags showed up on the belt. Luckily my two bags were among the first bags (Note to self: priority tags in EWR have worked 3/3 times) and I got through customs and to the baggage re-check area. I literally just dropped my bags on the floor by a United employee and ran to the nearest security check point. Having Premier Access with United this Sunday afternoon was not really a benefit, as the P.A lane in security was sooo long. I think only Star Golds flew out of EWR that day lol.
Well, I got through, got scanned by the TSA and started the looong stroll to my gate. In the other end of the terminal. Great.

I made it to the gate just as they announced the gate was closing. The gate agent asked me if I was the passenger connecting from Oslo, which I confirmed. I asked her if my bags would make it on the flight, which she assured me they would. I thanked her, scanned my boarding pass and got on the plane.

On the ground in EWR, just pushed back from the gate and ready to go to Orlando. And I see a familiar face (tail)

After departure I snapped some photos of an awesome sunset and fell asleep. 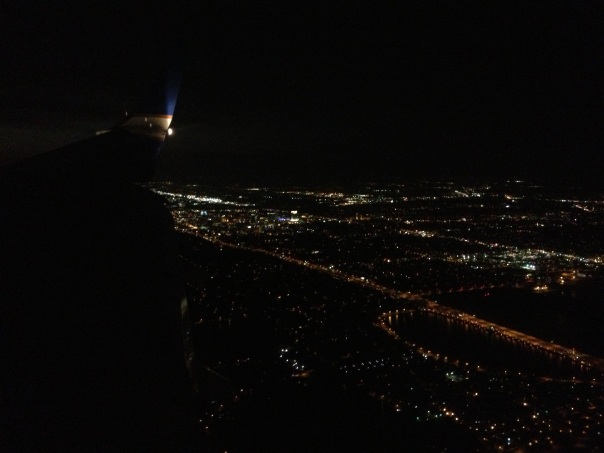 On approach to MCO

We landed on RWY18L and taxiied to the gate. Once off the airplane and inside the terminal I got on the free Wifi to check emails, and then headed to baggage claim where my bags were not the first to get on the baggage belt. Business as usual in MCO with the priority tags.

The SIXT shuttle picked me up from the terminal and drove me to the off-airport location SIXT has in Orlando. It’s only a 5 minute ride but still. There was a family onboard the shuttle as well. They were Danish 😛 and arrived with Lufthansa from Frankfurt. I thought that was a long wait at MCO before they got to the car rental shuttle. Lufthansa lands around 0500p and this shuttle ride was around 0800p. Hm..

Once at the car rental place, I got the keys for my rental car for the week, a Hyundai Elantra. Not as powerful as the Sonata I rented in November, but still a good, little car for me.

I decided to stay off the Interstate this late at night (I had been up for almost 24 hours, with minimal sleep on the flight down to MCO) and drove the backroads up to Lake Mary and my hotel there. The Homewood Suites by Hilton.

I got a take-out burger from a nearby restaurant and headed to bed. A long journey was over. A good one, but a little stressful in EWR with short connection due to the delay out of Oslo. 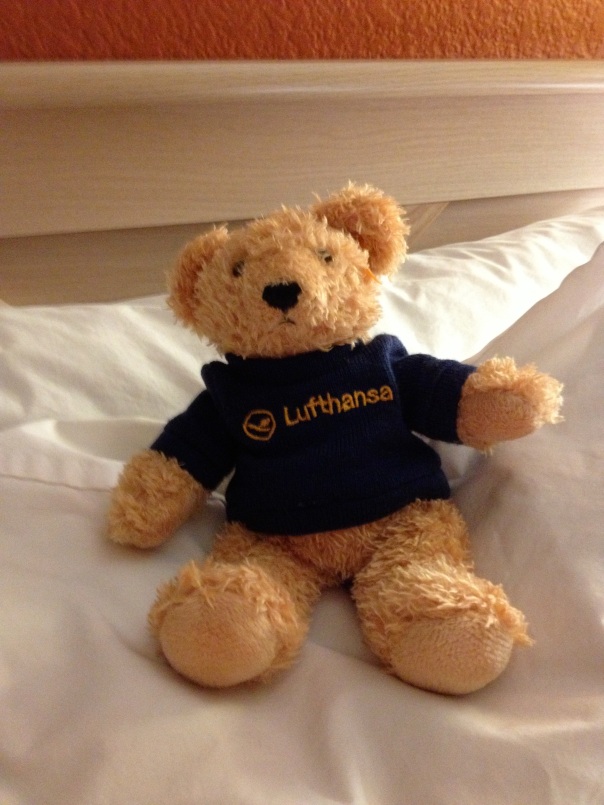 More to come on my biennial flight review and time building later!