← Some photos from Washington D.C
Bitten by the travel bug →

Impressions from the US capital

Two weeks ago, I was on my way to Washington D.C with Scandinavian Airlines (SAS) onboard one of their A340s (OY-KBM, Star Alliance color scheme) 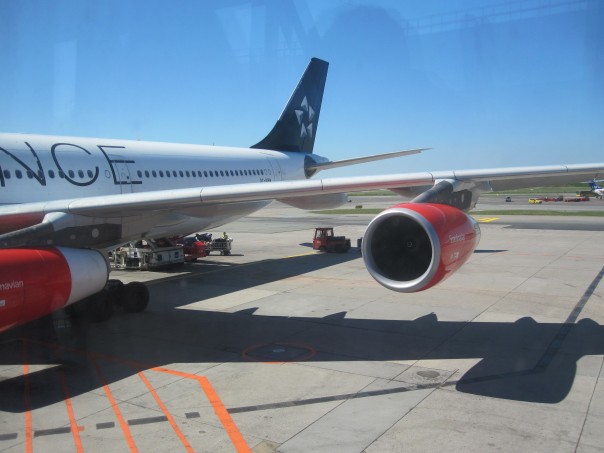 Photo taken through the glass in the jet bridge in Copenhagen

The flight was quite uneventful. I had picked out a great seat which gave me some extra leg room due to the economy extra section right in front of me. 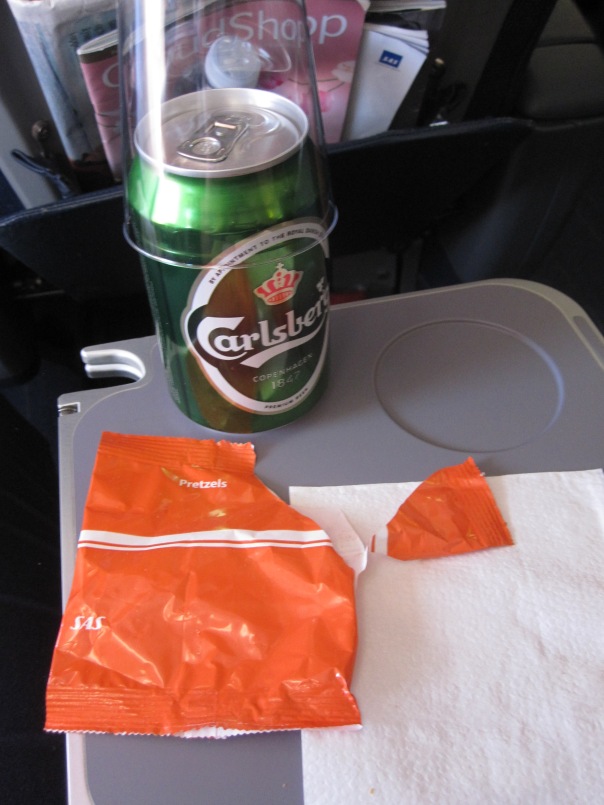 We were about an hour delayed out of Copenhagen due to some problems with loading the bags, but we landed 10 minutes ahead of schedule in Washington D.C (or rather, the Dulles Intl’ airport in the state of Virginia.) Immigration was a breeze, I was second in line for the “interview” but bags took forever to appear on the conveyor belt and I didn’t clear customs until about 15.40 local time (still, 35 minutes after I landed)

A taxi took me to my hotel in the center of the nations capital, on New Hampshire Avenue, NW which was surprisingly “rural.” Okay, there was a metro station relatively close, but I didn’t know about that until my second day there (yes, the first day included blisters..)
I decided to do a little exploring on my own (by foot) and walked past the American Red Cross national HQs, the White House, George Washington Monument and the World War II memorial.

The second day I toured the US Capitol which was an awesome experience. I had booked a tour online in advance, so I was sure to have a spot in one of the many daily tours. Considering this was Memorial Day weekend, I can imagine walk-ins would not be appreciated, even though I was just one person.

After the tour of the Rotunda and the first HoR (House of Representatives) I had lunch in the restaurant and then took the metro to the stop “Smithsonian” where I disembarked and headed towards the memorial I had anticipated the most, ever since I started thinking about the trip. The United States Holocaust Memorial Museum. USHMM.

First, like any other attraction in D.C, I had to x-ray my purse and walk through a detector similar to those at airports. Then I headed to the ticket counter where they handed out free tickets to the permanent exhibition. They were out of tickets for the day, and tomorrow’s tickets were almost gone as well. The only type of ticket they had left was military/police/fire fighter/veteran. Well, since I don’t meet any of the above-mentioned criterias, and this was the only day I had time to tour the USHMM, I got rid of my (almost) perfect American accent and started speaking Norwegian-English and said I had come all the way from Norway (which, after all was under Nazi-occupation for 5 years) and got a military ticket. Okay, now that I write this, I feel really bad, but the guy behind the counter issued the ticket and I was just happy I got to experience it.

The tour started and before we could take the elevator up to the 4th floor where the permanent exhibition started, we were each issued an ID card, like a passport. We were each issued a Jewish identity. That really made a deep impression on me, and the “role play” made it all so much more real.

The 4th floor was mainly about the Nazi uprising in Europe, but I’m not going to spoil too much for those of you who have yet to visit the museum.

As we walked through the corridors of history, everything was so real. We walked through a wagon that once carried people from occupied cities to the termination camps like Auschwitz and Treblinka. One entire room was filled with shoes that were found in one of the camps, from people that were executed. I could hear people cry as we walked further down the corridors, into the deep, dark history of World War II in Europe.

Two hours later, I had walked through the history of Nazi-Europe. Filled with all sorts of emotions. Hatred. Hope. Anger. Happiness. Sadness. All in a mix. Time for some fresh air.

I walked across the National Mall to the Natural History Museum. Quite the contrast. It was so hot out that weekend so I didn’t really spend too much time in that museum. Besides, I started getting tired, so I headed back to the hotel for a quick shower and had dinner at a nearby sushi restaurant (note to self: Kaz Sushi Bistro, voted the best sushi restaurant in D.C)

The third day, Sunday, I headed to the Smithsonian Air and Space Museum. I got off the wrong metro stop and had to walk about a mile (in that heat, pheeeew) to get there. But it was worth it. Space crafts, why planes fly (lots of hands-on learning for kids… or, really anybody!) modern aircrafts, “the golden age of flying”, the jet-age, simulators, aviation art +++ Definitely a great place to visit. The 747 nose section and Amelia Earhart’s Lockheed Vega were my two personal favorites. Also, a Norwegian aviator named Bernt Balchen had his head gear and googles on display in the golden era of flying section. Later that same day, I tried to “meet up” with him.

I could probably have spent the entire day at that museum. But I had things to see and experience. People to “meet.”

I took the metro to the Arlington National Cemetery where 400 000 souls are buried. It is such a big number, almost incomprehensible.
I went to see President Kennedy’s grave and the eternal flame. I went to see The Tomb of the Unknown, that would the very next day be the venue for President Obama’s Memorial Day speech. 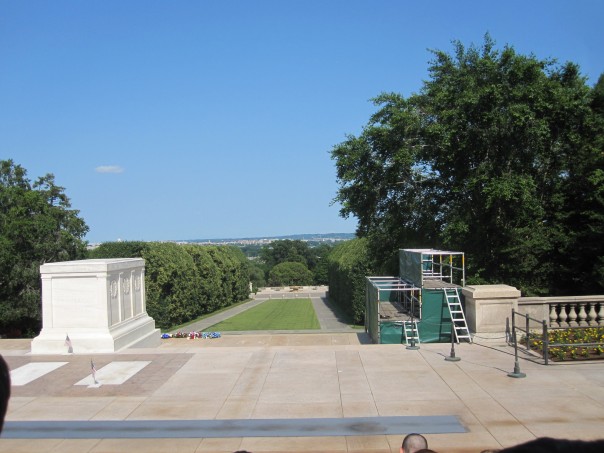 As mentioned earlier, I wanted to see Bernt Balchen, a colonel in the US Air Force. He is actually buried at the Arlington National Cemetery, but I guess it is permanentely prohibited to walk on the grass between the graves, so no Balchen-searching for me. But I know approximately where his grave is. Section 2, map grid W/X, 32.5, grave number 4969-2.

After those two days, everything else just becomes so irrelevant. Like the fact that I had steak at TGIFriday’s for dinner that evening. Or that my taxi cab driver was seriously spooky. Or that I forgot chop sticks when ordering sushi-to-go.

The last day in D.C was spent shopping fresh fruits from a farmers market near Dupont Circle, promenading the Embassy Row, snapping some last-minute photos of the White House and take a final good bye with the Arlington National Cemetery (note to self: do not try to access any areas the US President will pass by in a car escort in 5 hours, nor go to the Arlington National Cemetery on Memorial Day)

I ordered a cab back to Dulles around noon and I was on my way home. I was hoping check-in would start early, which turned out to not be the case. I wanted to check my bags and take a cab over to the other Air and Space Museum out by Dulles, where Space Shuttle Discovery has found it’s final “pad.” I guess I just have to go back some other time and visit that museum. Check-in didn’t start until 2.30 pm and my flight departed at 5.00 pm so there just wasn’t enough time this time.

I had my final US meal for a while (Burrito. Chipotle Mexican Grill. Yummy.) and requested a better seat, which the gate agent was unable to give me. So I decided to blow off some points on an upgrade to Economy extra. Better leg room. Better meals. Free drinks all night long. Good breakfast. Real cutlery. Yeah, it was worth it! And I had a two-seater all by my self. I was in SAS-heaven. 🙂

We landed a little bit ahead of schedule, and after exiting the aircraft we headed towards security where there was no line what so ever, and the normal passport control in to Schengen. 45 minutes connection non-Schengen to Schengen in Copenhagen is more than enough.

My last flight of the weekend was with a Dash 8 Q400, wonderful little noisy turboprop. I would love to fly one of those one day. We landed in Norway around 09.00 am and I was ready to get going. To work. I made it to work 09.59. Not bad, considering my morning commute was an 8-hour transatlantic crossing AND a European regional flight.

← Some photos from Washington D.C
Bitten by the travel bug →